(Landscape in a can: available from Uncommon Goods, and originally spotted on Inhabitat.)

More often than not lately, I find myself running not outside in the city as a runner arguably should, but indoors on a treadmill: a treadmill called ‘Ground Effects.’ Like the earth – the ground – but only in effect. Landscape-on-a-belt.
It’s the treadmill as landscape architecture.
Replaced beneath my feet by this moving technological substitute, the earth meets its counter-earth – some rogue machine-landscape, a prosthetic planetary surface, an evil twin – come back re-invented by man and his opposable thumbs, nothing but a thin ribbon of reinforced nylon repeating beneath me at 7.5 miles an hour. Difference and repetition.
‘Ground Effects’.
On a surface so named, where has the earth actually gone? This isn’t a portable landscape, like the flower-cans pictured above; it’s a landscape of interference, blocking your access to the planet it seems meant to replace and amplify. Terrestrial augmentation.
Some brief physics questions: does a treadmill operating fast enough – and I mean a really small treadmill, on the nano-level – counteract the gravitational effects of the planet beneath it? In other words, could you negate a gravitational pull by inserting insanely fast nano-treadmills – nanomills – between that gravitational pull and the object it is supposed to attract? Does the circular torque of the nanomills’ motion have any sort of countering effect upon centralized gravity? By dispersing it somehow?
And some questions of rhetoric: were Precor, the treadmill’s manufacturers, aware of the Heideggerian overtones of choosing the name ‘Ground Effects’? Were they hubristically attempting the complete rhetorical obliteration of the planet? By suggesting a world in which you could never contact the ground again, you could only experience ‘ground effects’, does the ‘Ground Effects’ treadmill constitute, in that way, a statement of some kind?
Is it an act of interpretation?
I’m tempted here to suggest the world’s most ambitious – if abjectly terrifying – planetary engineering project, in which the entirety of the earth’s surface is replaced by moving walkways, escalators, treadmills, and other automated surfaces, if only for the purposes of making a philosophical point. The earth can be simulated, and replaced.
For instance, in Japan, there is the ‘Earth Simulator‘: 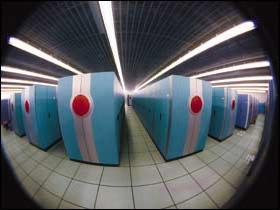 The Earth Simulator was, until last year – when it was beat by IBM’s Blue Gene (why not the Gene Simulator? would Gene Simmons sue them for libel…?) – the fastest supercomputer on earth. And, yes, its purpose is to simulate the earth: ‘In 1997 a team of Japanese engineers dared to imagine a computer so powerful that it could keep track of everything in the world at once – steaming rain forests in Bolivia, factories in Mexico belching smoke, the jet stream, the Gulf Stream, the works. What’s more, they dared to build it. On March 11, 2002, when they turned it on, the engineers did something no mere mortal had ever done before: they created the Earth. Or at least the next best thing.’
‘At least the next best thing’ – I thought that was gelato.
Using the Earth Simulator, ‘researchers can create a computer model of the entire planet, then scroll it forward in time to see what will happen’ – which is funny, because I remember a joke about that from the film 12 Monkeys: Brad Pitt’s character explains how his parents and psychiatrists recorded all his responses and statements as a child, then put them into a computer, created a program, ran the simulation, and now a perfect virtual model exists, predicting in advance every move and thought and impulse Brad Pitt might now undertake… The Brad Pitt Simulator.
And while I’m aware that I’m about to let the material get slightly ahead of me here, I do have to mention in this context the following news story. You want a Brad Pitt Simulator? Well, two already exist:

‘Twins [they were already twins! before the surgery!] Mike and Matt didn’t just dream of being movie-star handsome – they had one particular movie star in mind. The 20-year-olds from Arizona wanted to look like Brad Pitt. So they went under the knife. Plastic surgeons gave them new noses, chin implants, and whiter teeth. The result? The twins say they’re pleased, but even they admit that no one is going to mistake either of them for Jennifer Aniston’s husband’ – probably because they now look like Val Kilmer.
The interwaltzing dance of simulacra and copies here is almost impossible to track. Who’s who? Which is which? Are the twins still twins if they’ve been surgically altered? And what’s Brad Pitt got to say about this?
Perhaps most importantly, could I sue someone for deep psychological trauma if they showed up at my flat after having had plastic surgery to look like me? Attack of the clones. Or a Lovecraft story gone horribly wrong.
Can you copyright your own face?
In any case, returning rather quickly to the real subject of this post – surrogate earths – artist Buster Simpson makes ‘Portable Landscapes’ out of seeds, turf, and suitcases:

We find here – in fact, in all these examples – that by simulating, replacing, or otherwise making redundant the earth itself, landscapes – portable (the flower-cans, the suitcases) or not (the treadmill, the supercomputer) – can become active philosophical statements in which ‘the ground’, ‘the original’, is replaced by its simulacra.
Predictive models, advanced algorithms, even the simplest of seedbanks – not to mention Biosphere 2 or the Eden Project – provide us with new landscape architectural possibilities: engineering *terra infirma*. Earth Redux.
Difference and repetition, again.

This site uses Akismet to reduce spam. Learn how your comment data is processed.

BLDGBLOG (“building blog”) was launched in 2004 and is written by Geoff Manaugh. More.